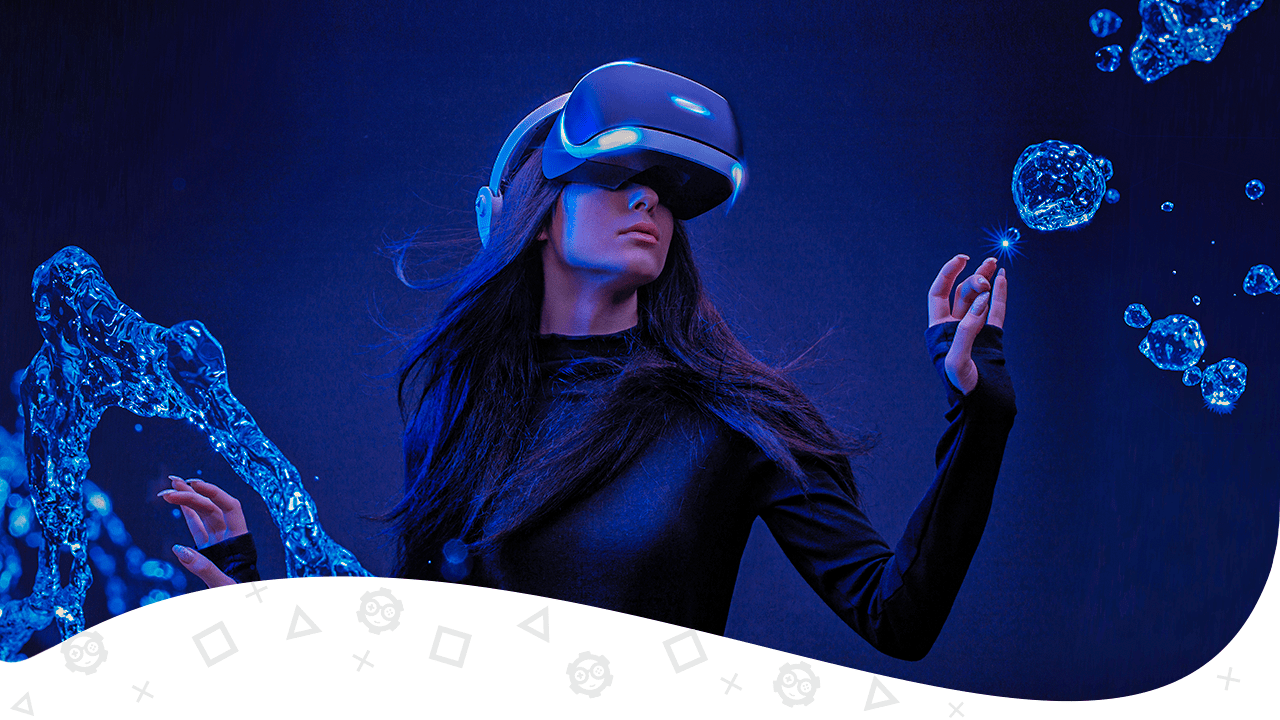 The video game industry is rocking right now! Practically, there are no people who don’t play games, either on console, PC, or mobile.

Nowadays, the gaming supply does nothing but grow and grow. The gaming industry was valued at USD 162 billion last year, and it is expected to double its value in 2026.

But, what are the reasons for the video game market to grow so rapidly?

What new advancements took place in the past few years in gaming technology that have toppled the gaming dynamics?

We are going to talk about that and gaming in the future today. We’ll cover new technologies that bring excitement and varied possibilities you have at your fingertips.

Virtual Reality has been a crucial element surrounding the mind of game developers and many companies for years. Of course, due to the logical limitations, it was never possible to explore and put this concept into practice. It was only a matter of time before this new tech arrived on our devices.

But, What do these gaming products are?

Both worlds are very similar but not the same, and both lead to digital transformation.

As its name says, Virtual Reality tries to create an entirely new reality, a new world from scratch with new rules, virtual characters, and a completely new environment. Everything while you are in the same room.

To reach this new world of a new era created by computer algorithms, you must use virtual reality headsets to play, which sometimes can be heavy and a bit uncomfortable.

In the present, virtual reality games can integrate objects that users can feel and touch through new devices, such as gloves and wrists. Thanks to this, VR games and developers can drive player engagement and make that world more lifelike.

Augmented reality, on the other hand, promotes a similar but not the same sentiment. It integrates mobile devices technology, projects new objects, and a fresh perspective over the real world. In other words, AR games are a mixed reality. For now, the only way to play video games with augmented reality is through mobile devices.

Currently, mobile phone games are the “apple of the eye” of many big companies and big publishers and an entrance door for many indie studios. MOBAs, MMORPGs, puzzle games, and card games are the most popular in this regard.

Mobile is becoming the ideal platform for consumers looking for new ways to stay occupied and entertained. Pay attention to the data below:

Nowadays, every person has a mobile device or a smartphone, so it is logical to think that most of them play a game at least once a day.

Video games developers and game studios know this, and for this reason, they focus their intents on creating new games and new content for smartphones.

Most of these games had in-app purchases enabled.

Thanks to this, they can cover the development costs and start thinking about other ideas or working in the early stages of other games.

Every 7 or 8 years, the gaming industry takes a qualitative leap when it comes to consoles. Right now, we are in the middle of passing from a past generation to a new one.

What’s more, the streams point to creating gaming libraries where users can access hundreds of games and play whatever they want instantly.

Xbox Game Pass of Microsoft is the perfect example. This console offers the gaming platform as an integrated service.

With faster load times, state-of-the-art graphics, easier and early access to new games, next-generation consoles are the workhouse that pushes development in the video game industry.

Playstation 5 and Nintendo Switch also offer a huge cluster of own games, third-party games exclusive for these consoles, in addition to an extensive retro games library.

Besides, the Sony console is working on the interaction between the DualSense and new games, which will bring new possibilities in terms of functioning and integration.

Although these consoles may be frozen in time in terms of their capabilities,  they’re getting upgrades almost every year. Maybe a new version of the same system can shed light on the console’s life, just like it happened with PS4 Pro and Nintendo Switch Oled.

Game streaming platforms like Twitch, Hitbox, YouTube Gaming, Facebook Gaming, and many others have become highly popular in the past five years, thanks to high-speed internet.

This way, gamers can monetize their activities while they show new games to their audiences.

Gamers can stream, get social interaction and earn directly through donations, ads, or subscriptions with platforms like Twitch donation, Patreon, and others.

Some of the most popular games on streaming platforms are Animal Crossing, Fortnite, LoL, and No Man’s Sky.

One piece of advice: start playing games, if you don’t already; it can be very profitable.

Free Games will Morph Again into Money-Making Opportunities for Players

Many tech companies have a business model based on offering a game that you can play for free but you can still get some additional advantages if you pay for them.

It is possible that in the future these kinds of business models may be profitable for players too.

In some communities, big developers are talking about creating an integrated world where people go and live an alternative life. In this context, continuous player feedback would be necessary to improve this life.

For example, Epic Games is trying to create a Metaverse where all its games and gamers come together, providing services and creating a multifunctional world.

In this space, gamers may sell their services or items to other gamers and get revenues for these exchanges.

These kinds of assets in popular games will be dramatically appreciated by those looking for opportunities to make some money in the near future.

It has been said that the future of video games is in the cloud. What does it mean?

In terms of the idea, it means players have access to a remote data center where they can choose and play every game they want in real-time in the form of digital content.

Unlike traditional gaming, cloud gaming offers much more flexibility, digital distribution, and subscription services with easy access to new features and social elements. Besides, it offers an increased diversity in the supply of games.

In terms of improvements, upgrades are rolled out faster, without too much concern about features of an only device, as the remote server is the one that provides the processing power.

One of the best advantages of cloud gaming is that gamers can choose the platform where they want to experiment with digital games.

For example, Steam by Valve Corporation is a go-to platform for players as it contains hundreds of games playable using whatever they want, that is controller, mouse, keyboard, or touching screen. Check the platform out and see for yourself what we are talking about!

Increased Use of AI

AI has been in use in games as early as the 1950s, but it is now when the involved factors are reaching the importance they claim.

All in gaming is about interaction with the environment, characters, and AI. When players head to a game, they immerse themselves in a world full of life. This virtual life is controlled by AI.

Non-player characters (characters that are not managed for a human player), or NPCs, are the most common form of AI in a game (especially in strategy games). They enrich the path, the believability, interactive and game mechanics.

Also, a second character can play an important role in the gaming experience. So, recent AI can offer better second characters who can interact with you more smartly. They can read your strategy and adapt to your movements.

The best thing is some game designers of indie games are starting to put this option within the game, where you can choose the personality of the characters. This changes the decisions these characters make.

Another common use is procedural storytelling. Here, the narrative generated by the AI is integrated into the game by modifying some aspects of the story.

5G Puts An End To Lag

Nowadays, online games are becoming the most popular games. It especially applies to multiplayer online games where groups of friends can interact with each other and spend hours and hours getting fun.

Examples of the aforementioned are League of Legends, Pokémon Unite, Fortnite, and others.

The problem is that most gamers must deal with the issue of game lag or bad Internet connections. That’s a tedious issue because it is practically impossible to get good results in those conditions.

Samsung highlighted that 5G latency is significantly lower compared to 4G. This new technology incorporates a speed of sub-10-millisecond, which reduces packet loss and jitter.

This means that the number of gamers who can be active at the same time and connected to the cloud is going to increase with time. This is perfect, especially in dense urban settlements.

With 5G networks growing in prevalence around the world, developers can now deliver unprecedented enhancements to their games. The sky’s the limit.

The gaming industry is the new dream machine, the new dreamland of the entertainment market where dreams come true.

To create games, interesting games, passion is the key element, but also be aware of all changes in the industry in new technologies.

The increasing competition and the facility to design games (access to hardware and software) offer developers and major players a new overview of this art.

Also, knowledge about new distribution channels and proper advertising is desirable to publicize these changes in the industry.

If you are a developer and you are not sure how to make your game appear in Google, contact us, and let’s talk about your project.

Our company will provide you with case studies so that you can imagine and see for yourself how our strategies work. Our experience doesn’t limit to promoting and making games – we have played for years and we know what we’re talking about.

We’ll answer you in no time. You’ll see very soon as your game takes off and is part of the new gaming generation.

What is the Future in Gaming?

The future of gaming is gamers experience games in the cloud, PC games, console games, mobile games, saving the preferences of the players in the service provided by game publishers. Also, increasingly immersive games that expand their life experiences by including more realistic graphics and complete interaction with other players.

What Are the Trends in Gaming?

What is the Future of Game Design?

The future of gaming is eSports, which continues to rise in popularity and have a huge success. Thanks to new technologies, such as 5G, more developers will lean towards this kind of game. That being said, eSports and online competitive gaming may expect to become a $1.8 million industry by 2022.

How is the Games Industry Changing?

Currently, the gaming industry is larger than the movie and music industries combined. The greatest change is related to technical innovations, with the inclusion of new industries and participants. This industry has new goals at the moment, such as reaching a new demographic market and bringing back some classics of the past, such as the Final Fantasy VII remake.